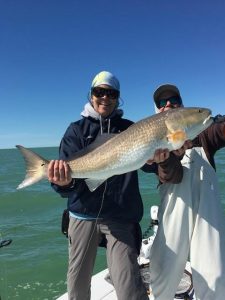 That is a Big Red !!! January 26 2020
Big Red was Richards favorite gum back when he was a kid he said. These Big Red Fish Richards friend Crystal caught on this day were the biggest he had caught on his boat here in the Florida Keys. Richard spent the day with Crystal and Andy fishing until the end of the day. Every one of the Red fish caught were released back to fight another day. Between Crystal and Andy they both had some Reds ranging from 15-25 lbs all eating shrimp on a jig. All caught on light tackle 20lb power pro line and Penn Reels. Richard was telling Andy and Crystal how he had caught a few nice Cobias in Florida’s beautiful blue waters the day before. Richard thought they had had hooked a Cobia but what a surprise, it was a Big Red!

← Snook fishing is on fire!!